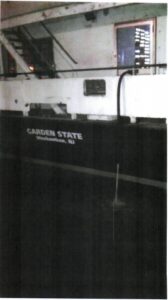 Newark, NJ, December 4, 2020. A lawsuit filed by former employees of NY Waterway, which operates ferry vessels between New York and New Jersey, claims the company illegally dumped raw sewage, oil, fuel, coolant and other pollutants into New York harbor and surrounding waters for years while operating a fleet of 30 vessels that carry up to 30,000 passengers a day.

The complaint alleges that NY Waterway, under contract to the City of New York and Goldman Sachs, dismissed the concerns and complaints of the plaintiffs in order to cut costs, boost profits and remain on schedule. The company allegedly failed to maintain equipment designed to safely dispose of the pollutants and regularly told the plaintiffs to “get the job done” and lie about the illegal practices if asked, according to the suit. Both were threatened with termination if they took their concerns to management, and ultimately Khatcikian was fired for doing so, the complaint alleges.

“These brave defenders of the public interest are admitting their own wrongdoing in order to stop NY Waterway from further polluting the harbor and other local commercial and recreational waters,” said Michael D. Fitzgerald, co-counsel for plaintiffs. “They lost their jobs because of NY Waterway’s illegal practices, and then decided to put the interests of 15 million residents over their own futures. They are true environmental heroes.” 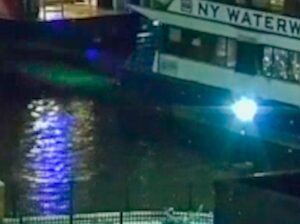 According to the complaint, videos and photographs taken by the former employees show workers dumping sewage through a hose thrown over the side of ferries and illegally dumping it directly into the Hudson River from the holding tanks. In one video, dye provided by the EPA to track the pollution is shown billowing across the river as employees scramble to disperse the evidence by stopping and starting engines at the dock. The ferry depicted in the video was taken out of service and its GPS device turned off before being moved to a New York-based dock, the lawsuit alleges.

The complaint alleges that when the EPA returned a few weeks later, the bathrooms on ferries under investigation were either locked or removed entirely. The removal of the bathrooms allegedly took place just days after NY Waterway received notice of Clean Water Act violations.

“NY cynically put out-of-order signs on bathrooms and even removed toilets once they learn they were being watched,” said Fitzgerald.

The complaint further claims that NY Waterway’s ferries engaged in the act of “running open,” an illegal practice where ferries would discharge their holding tanks while sailing between destinations. NY Waterway allegedly also delayed repairs of equipment and cooling systems until it knew federal inspectors were due, causing hundreds and hundreds of gallons of toxic waste to pollute the river and surrounding waters daily. Gerald Robinson, a Halunen Law attorney who also represents the plaintiffs, commented: “this case was brought under environmental laws allowing citizens’ suits, as well as the False Claims Act, showing the critical role that whistleblowers play in eliminating environmental injustice.”

According to the lawsuit, NY Waterway and affiliated companies improperly received approximately $9.6 million from federal and state agencies since 2015, including from the Department of Transportation, Federal Highway Administration, Federal Maritime Administration, Federal Emergency Management Agency and New Jersey Transit. NY Waterway unlawfully certified it was in compliance with all environmental laws in order to receive the money despite knowingly and illegally discharging pollutants every day, the complaint alleges.

About Halunen Law: With offices in Minneapolis, Chicago and Phoenix, Halunen Law offers experienced legal representation to employees, whistleblowers, and those who have been wrongfully injured. Halunen Law has achieved a reputation as a fearless, tenacious and successful plaintiffs’ law firm, with a laser focus on achieving justice for its clients. For more information visit halunenlaw.com.