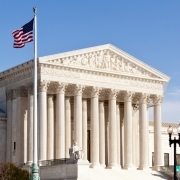 As many lawyers practicing on behalf of wrongfully terminated employees know, the United States Constitution prohibits a government employer from discharging or demoting an employee when he or she speaks out on a matter of public concern. Waters v. Churchill, 511 U.S. 661 (1994) (citations omitted). In April of this year, the United States Supreme Court expanded that cause of action just a tad more in a novel case captioned Heffernan v. City of Paterson, 136 S. Ct. 1412 (2016).

In that case, Heffernan was a police officer working in the chief of police’s office in Paterson, New Jersey. Both the chief of police and Heffernan’s direct supervisor had been appointed by Paterson’s incumbent mayor, who was running in an election against Lawrence Spagnola, who, low and behold, happened to be a friend of Heffernan’s family. Despite his connection to Spagnola, Heffernan did not support and was not involved in the Spagnola campaign.

END_OF_DOCUMENT_TOKEN_TO_BE_REPLACED Halunen partner and whistleblower/False Claims Act attorney Susan Coler recently spoke at the National Employment Lawyers Association 2016 Annual Conference in Los Angeles. Her topic was proving discrimination and retaliation when there is no “smoking gun” — that is, when there is no direct evidence of illegal conduct. She noted that the law allows juries to infer retaliation and discrimination from many different kinds of conduct. This includes, for example, evidence that an employer engaged in a sham investigation, did not follow its policies, fabricated or exaggerated the reasons given for termination, or treated the plaintiff differently than other employees. The panel on which she spoke included Professor Michael Foreman from Penn State Law and New Jersey attorney Patricia Barasch.