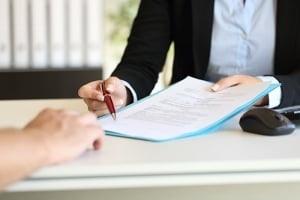 Back in March I wrote a blog about a common call I get from executives. They’ve just received a a severance agreement and want to make sure it’s “safe” to sign. I discussed my surprise that people who made their careers negotiating for their employer, didn’t have an appetite to negotiate for themselves.

A recent example proves my point about the importance of seeking advice from an experienced severance lawyer if you are confronted with a severance offer from your employer. I represented an executive who was being offered 2 weeks pay for each year of service with the company- a very common severance formula. Since the executive had only been with the company for 2 years, that meant 4 weeks severance and 1 month of COBRA. The executive had made significant contributions to the company’s performance prior to his termination and he was given no forewarning that his job was in jeopardy. He asked me if I would review the agreement and give him my thoughts. So I did. After I told him that the language was standard and explained the implications of the release, I asked him a few follow-up questions:

After our discussion, the executive agreed to let me try to get more, as I had also identified potential age and whistleblower claims that he could bring against the company.

My client was the oldest executive in the C Suite and a new President/CEO had little, if any, patience for him. A month before his termination my client had also raised concerns in an Executive Committee meeting that the company was not giving the federal government the best price on a number of products it sold through a federal supply contract. I wrote a demand including facts supporting various potential legal claims, our position on liability, and a damage computation that calculated the value of his lost wages and benefits projected 7 years into the future. The potential damages were in the mid 7 figures. After receiving our demand, the company agreed to mediate the case in an effort to resolve the dispute. The mediation was successful and my client walked away, not with the nominal original offer, but a 7 figure payout. Needless to say, my client was thrilled that he agreed to negotiate with the company.

What many people don’t know is that when you look at all the various incentives and benefits provided to executives, there is often much more money IF, and only IF, it is demanded. As an example, companies can change the vesting schedule for stock options upon separation so that the executive can realize the benefit of the appreciation in the company’s stock. This alone could be a significant additional benefit to be negotiated at the time of termination. Further, the 4 weeks that was offered in my case above was based on an unwritten company practice—. the company was not bound to that formula.

Based on pure equity and fairness, companies are often willing to pay much more in recognition of a departing colleague’s contributions to the organization. It is not uncommon for us to be able to negotiate significant multiples of the initial severance offer. Why? Because we asked and gave them reasons why paying more would be in the best interest of all the parties.

So, if you or someone you know is faced with a severance offer, remember the importance of working with an experienced severance attorney and asking for every penny to which you are entitled.

Clayton D. Halunen, founding and managing partner of Halunen Law, is an experienced severance attorney. Under his leadership, Halunen Law has achieved a reputation as a fearless, tenacious and successful plaintiffs’ law firm, with a laser focus on achieving justice for its clients as well as meaningful social change. He is a frequent lecturer and has been recognized as “SuperLawyer” every year since 2003. He was recognized as 2014 Attorney of the Year for his representation of former Vikings player Chris Kluwe.