It was announced yesterday that the CEO of Insys Therapeutics Inc., Micheal Babich, pleaded guilty to participating in a nationwide scheme to bribe doctors to prescribe its opioid medication Subsys. Babich resigned as the Arizona-based drugmaker’s CEO in 2015. His guilty plea comes just weeks before Insys founder, and one-time billionaire, John Kapoor goes to trial facing allegations of racketeering conspiracy.

The Government alleges that between 2012 and 2015 Insys and several executives conspired to bribe doctors through kickbacks for sham speaker programs in exchange for prescribing Subsys. This type of scheme is all too common in the American Health care system – but is exactly the type of situation the False Claims Act seeks to combat.

Under the False Claims Act individuals with knowledge of fraud against the government, including the payment of bribes to physicians, can be rewarded for exposing that illegal conduct. Violations of the Anti-Kickback Statute (AKS) are pre-set violations of the False Claims Act. Because payments to physicians can influence their medical judgment, the law states that a claim may be false or fraudulent when it was caused by a kickback or bribe.

What is the AKS?

The AKS is a criminal statute that prohibits bribes, kickbacks, or other “remuneration” to induce or reward prescription of drugs or medical devices, patient referrals, or other business generation. Remuneration under the AKS can take many forms including cash, gifts, expensive meals, free rent, expensive hotels, and excessive compensations for consultancies, speaking engagements, or directorships.

Criminal penalties and other sanctions can include jail time, fines, and exclusion from participating in state or federally funded health care programs. Babich is facing up to 25 years in prison for his participation in the illegal AKS scheme at Insys. Insys has already agreed to pay at least $150 million as part of a settlement with the Department of Justice. Had that payment resulted from a False Claims Act lawsuit – the person who blew the whistle would be entitled to 15-30% of the amount, or $22 million to $45 million. Bringing fraud to light not only can put criminals behind bars but also can result in substantial rewards for those who take the risk to expose fraudulent conduct.

As an attorney with the Halunen Law False Claims Act/Qui Tam practice group, Nathaniel F. Smith is determined to bring fraudulent conduct to light, and to justice. Having recovered millions on behalf of whistleblowers in both employment retaliation cases and qui tam whistleblower lawsuits under the False Claims Act (FCA), he is relentless in his pursuit. 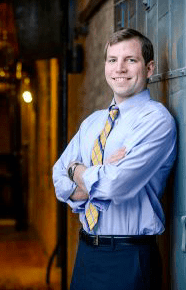