You are here: Home / BLOG / EMPLOYMENT / International Women’s Day – A Call for Change!

International Women’s Day, celebrated on March 8th, is a time to reflect on the progress made for women over the last 100 years and celebrate their courageous acts throughout history.[1]  It is also a time to call for continued change.

Despite the movement to propel women’s opportunities, corporate America continues to allow an uneven playing field.

A recent study, Women in the Workplace 2018, by McKinsey & Company and in partnership with LeanIn.Org, found that the growth of women at every level in corporate American has stalled.[2] While the study found that women are doing their part – earning more bachelor degrees, asking for promotions, negotiating better salaries, and staying in the workforce at the same rate as men  – women remain unrepresented at every level.

It begs to question if women are doing their part – what’s the problem?

The Answer – Companies are not held accountable.

While the vast majority of companies say they are committed to gender diversity – the evidence indicates otherwise. Women are less likely to be hired for entry-level positions and promoted to manager-level jobs. The disparity widens further – and further – as promotions hit the C-Suite level. Factors such as discrimination and sexual harassment contribute to lack of diversity in the workplace.

Gender discrimination can take many forms, yet it always signals disrespect. It is also illegal under Title VII and the Minnesota Human Rights Act, among other laws. Sexism can be subtle, such as a male coworker questioning a female coworker’s judgment on an area of expertise. It can be severe, such as a male manager making a derogatory sexist comment to a female colleague. As negative experiences compound over time, women view their workplaces as less fair and are three times more likely to leave their jobs.[3]

Thirty-five percent of women in corporate America experience sexual harassment at some point in their careers, such as hearing sexist jokes to being touched in an inappropriate sexual way. Women who do not conform to traditional feminine expectations – holding authority and working in male-dominated fields– are more likely to be targeted. Despite the momentum of the #MeToo movement, we need continued emphasis that sexual harassment is unacceptable and will not be ignored.

If you have experienced discrimination or sexual harassment, know that you are not alone. We can help. For over 20 years, Halunen Law has fought for the rights of both men and women, who are subject to unwelcome sexual comments and behavior, as well as those subject to unlawful discrimination. We hold employers accountable so that you can feel safe in the workplace. 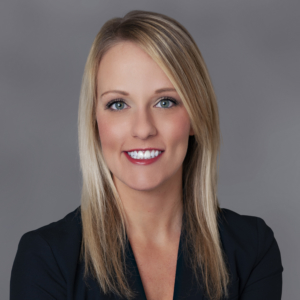 Employment attorney Amanda Crain has been selected into Minnesota Super Lawyers Rising Stars, an elite group of only 2.5% of Minnesota attorneys under the age of 40, consistently since 2014. She is proud to work at a a firm founded on a deep commitment to do what is right for employees facing wrongful termination, discrimination, harassment, or other illegal workplace practices.