Courage. Perseverance. Integrity. Susan Coler is energized and inspired daily by all her clients bring to their fight against fraud.
A Partner at Halunen Law, Susan is a member of the Halunen Law False Claims Act (FCA)/Whistleblower Practice Group, a team of attorneys solely dedicated to litigating False Claims Act and other whistleblower cases across the country. She represents whistleblowers who challenge illegal corporate conduct, particularly fraud against the government. As an MSBA Labor and Employment Law Specialist, Susan has also brought successful retaliation claims in connection with FCA/qui tam cases and as stand-alone actions.

Susan represented a relator in an FCA claim against Abbott Laboratories that resulted in a civil settlement of $800 million (total settlement of $1.5 billion), the fifth-largest civil healthcare recovery ever achieved under the FCA. Her expertise also takes her to less visible but important cases and causes across the United States. The cases, large and small, include fraud against the government in the areas of pharmaceutical sales, defense contracting, provision of health care and home health services, general government sales and small business set asides. She particularly enjoys putting clients’ facts into a persuasive narrative and then developing the complex legal arguments needed to make a compelling case.

Susan speaks regularly at local, regional, and national legal conferences on whistleblower-related topics, the False Claims Act and employment law. Susan is rated as AV®-Preeminent by the Martindale-Hubbell Peer Review, Susan has consistently been named a “Super Lawyer” since 2008 and has been named several times on the Super Lawyer’s list of Top 50 Women Attorneys in Minnesota. She also received the 2015 Karla Wahl Dedicated Advocacy Award from the Minnesota Chapter of the National Employment Lawyers Association.

Motivated by the power of whistleblowers to achieve systemic change—and outraged at the mistreatment of those who blow the whistle on corporate wrongdoing—Susan is driven to confront illegal corporate conduct and pursue justice on behalf of her courageous clients. 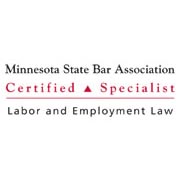 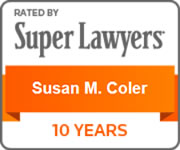