What are the Goals and Rewards of Whistleblower Programs? 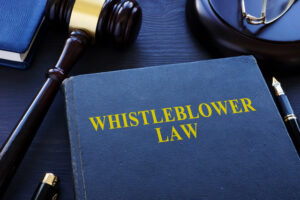 The news in recent years has had many stories about “whistleblowers”—what they reported, what caused them to blow the whistle, and what happened as a result. Perhaps you have seen some sort of misconduct on the part of an employer, a corporation, a competitor, or a health provider. And you wonder “Am I a whistleblower?” or “What do I do?” Or perhaps you have already reported some wrongdoing and are wondering if you are now experiencing retaliation.

There are many kinds of whistles to blow, many incentives for blowing the whistle, and many protections for whistleblowers. The procedures and processes vary, depending upon which law offers the protection. This means that the wise thing to do if you are in this situation is to contact an experienced whistleblower attorney who can help you sort out what has happened and what to do.

Protection for Blowing the Whistle on Wrongful Conduct

A whistle can be blown when you are experiencing a personal employment situation that violates federal or state laws. For example, if you are experiencing discrimination at work because of your gender, race, or religious beliefs, you can report that discrimination. Federal and state laws generally prohibit retaliation for making the report. If retaliation occurs, there are actions you can take, including filing a lawsuit. A successful whistleblower claim of this type has the potential to deter employers from illegal conduct and, importantly, to make you whole, for example, by making up lost pay and compensating you for the emotional distress you have experienced.

Many federal and state laws prohibit retaliation for other types of whistleblowing, including reporting workplace safety violations, abuse of vulnerable adults, discriminatory conduct against other employees, illegal pay practices, and violation of other state and federal statutes. Federal and state employees often have special protections for reporting government wrongdoing, waste, fraud, and abuse. These anti-retaliation provisions provide similar “make-whole” relief to a whistleblower as described above.

Reward Programs for Blowing the Whistle

Whistleblower reward programs include federal and state statutes (False Claims Act statutes) prohibiting fraud against the government in any area, including health care, defense procurement, small business programs and government grants. Significant tax fraud is covered by a separate IRS whistleblower statute. Rewards are also available to persons who report fraud that impacts investors in securities and those who participate in commodities futures. Corrupt foreign practices by corporations are also covered by a rewards statute (Foreign Corrupt Practices Act) that covers, among other things, bribery involving foreign governments.

These statutes recognize that the government cannot monitor all of its activities to identify where illegal conduct or fraud has occurred, and that individuals who observe the illegal conduct are in a much better position to assist the government in challenging that wrongdoing. Billions of dollars have been collected as a result of whistleblower actions under statutes described above.

When You Reach a Turning Point

It is daunting to reach a turning point because you have experienced or observed conduct that you cannot ignore. This is when you need experienced whistleblower counsel to help you understand your options and chart your course. Knowing which statutes apply to your situation and how to invoke them is obviously important along with many other issues. For example, it is important to know that some whistleblower programs allow the whistleblower to remain anonymous, and some do not, but that there is always a risk that a whistleblower will be identified. It is also important to know that blowing the whistle can take a long time, but that patience will bring satisfaction that you have done what you can and need to do.

Whistleblower laws empower individuals to challenge wrongdoing. Unethical, unlawful, and unsafe practices tend to get worse the longer they are allowed to continue. More people can be hurt, more taxpayer money can be wasted, and those who follow the rules can lose to underhanded tactics. By stopping wrongdoing, whistleblowers send the message to individuals and organizations that there are repercussions of illegal conduct, and they will be held accountable. Whistleblowers who feel this urgency to act provide a tremendous service to their communities, their employers, taxpayers, and their government. Halunen Law values the courage of those who step forward and is committed to providing them with wise, compassionate, and results-oriented counsel.

A Partner at Halunen Law, Susan Coler is a member of the Halunen Law False Claims Act (FCA)/Whistleblower Practice Group. She represents whistleblowers nationwide who challenge illegal corporate conduct, particularly fraud against the government. She represented a relator in an FCA claim against Abbott Laboratories that resulted in a civil settlement of $800 million (total settlement of $1.5 billion), the fifth-largest civil healthcare recovery ever achieved under the FCA.